The Next Phase in NAS Protection - DNAS

If you’re the person who’s on the hook to protect your company’s NAS-resident data, there’s a good chance you’re familiar with the Network Data Management Protocol (NDMP). This industry-standard protocol was introduced in the 1990s to solve the pressing problem of NAS data protection. The problem was simple: NAS storage capacities were growing at a pace that far exceeded network bandwidth expansion, so it was getting harder and harder to back up large centralized storage repositories over the network. That’s when NDMP emerged, providing a SCSI-based means of bulk data movement that would avoid clogging up the network during a backup job.

NDMP has evolved over the years, but it still imposes some inconveniences. Although NDMP is an industry-standard, each supporting vendor packages data with its unique attributes before sending via the NDMP protocol. That means a backup from one NAS platform can only be recovered on the same vendor’s platform, creating restrictions. NDMP backups also require a lot of hand-holding to maintain optimal performance, making the process manual. An administrator can work hard to improve throughput, achieving great results until the next change occurs on the file system (happens every day!) to throw a wrench into the system and bring backups to a crawl.

We’ve prioritized addressing the challenges created by NDMP by introducing a new feature called Dynamic NAS (DNAS) Data Protection. With DNAS, data is protected by mounting the NAS volumes over the network using a standard Veritas NetBackup™ Client or Media Server and leveraging services within NetBackup such as Accelerator and deduplication to achieve maximum NAS backup operation efficiencies.

Simplified administration—DNAS discovers data resources on NAS volumes, applies a protection policy and just like that, the data is safe.

Automatic performance tuning—At the heart of DNAS is an innovative approach for maintaining ongoing optimal performance on NAS backups. The workload is split into multiple streams that can fully leverage available server resources. As the backup progresses, a file crawler monitors the work queue and applies intelligent insights to optimize performance with continuous balancing. The result is a fully utilized backup server for the entire duration of the backup.

Data portability—With DNAS, you can restore data onto any platform—virtual or physical, cloud, or data center—providing maximum flexibility and helping you avoid getting locked into any platform.

NAS integration—By leveraging the native snapshot tools on the NAS platform, DNAS provides point-in-time consistency as well as fast restore. To further enhance performance, DNAS references the onboard change file tracking (where available) to quickly identify the new data to protect, bringing maximized efficiency to the discovery portion of the backup process. 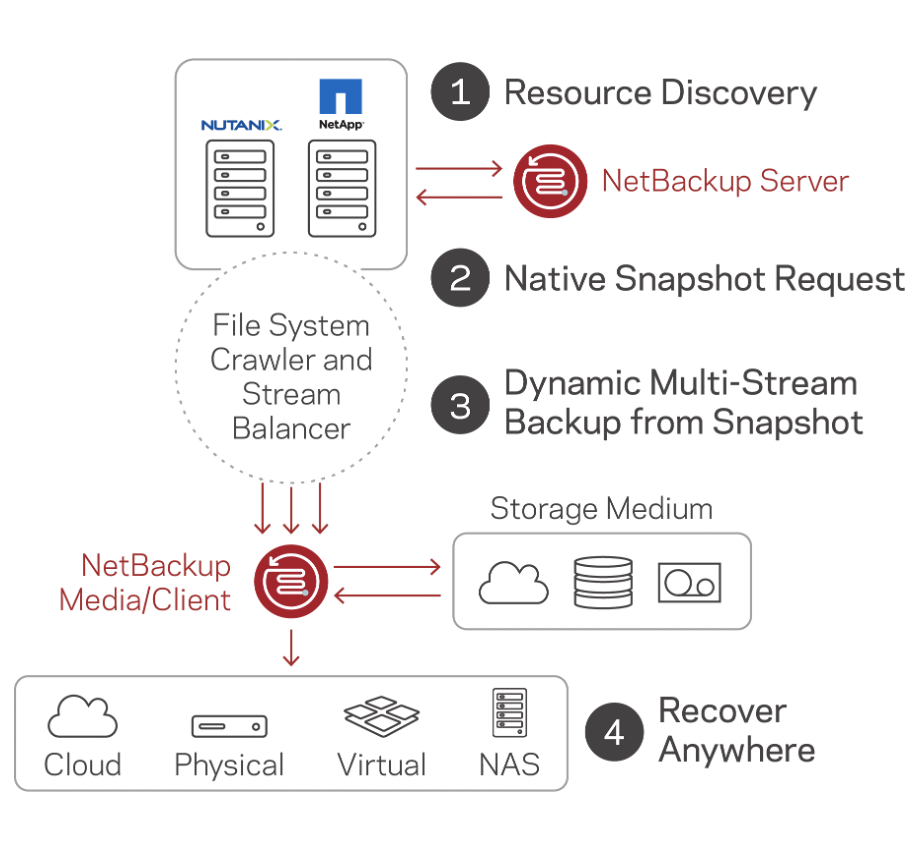 Figure 1. The flow of the DNAS feature.

With NetBackup 8.3, we offer protection for NFS volumes on NetApp and Nutanix Files (see Figure 1).  As we continue to innovate in this critical area of data protection, watch for expanding coverage for additional network protocols, support for more NAS vendors, and new features to continue to make the lives of storage professionals better.

To learn more about the other exciting new features in NetBackup 8.3, visit: