Please enter search query. Search <product_name> all support & community content...
How to use BEMIG to manually upgrade the Backup Exec database from a previous version

Need to manually upgrade Backup Exec from a previous version.

The recommended upgrade method is to allow the Backup Exec (BE) installer upgrade BE and its database during the installation. If that fails to occur or a saved database from a previous BE version needs to be added to a newer BE version, the BEMIG tool can be used. This tool follows the same upgrade version rules that the BE installer has. This is noted in the chart below.

Note: If the .mdf and .ldf files are from an older version of Backup Exec installed on a different server then please do not follow the procedure below if any of the following are true:

2. Stop the all Backup Exec services (including the  SQL (BKUPEXEC) service).

3. Open  \Program Files\Symantec or Veritas \Backup Exec Directory.  Copy the Data folder and paste it in the same location. Rename the "Copy of Data" to "Data-'TodaysDate' or "Data-Version#-New"

4. Copy the saved Database from the previous BE version into the \Backup Exec\Data folder(or the entire folder).
This will be bedb_dat.mdf and bedb_log.ldf files.

5. If the Catalogs have been saved also, rename the Catalogs to Catalogs.old, then copy/move the saved catalogs under Backup Exec.

7. Set the registry keys for BEMIG.

Warning: Incorrect use of the Windows registry editor may prevent the operating system from functioning properly. Great care should be taken when making changes to a Windows registry. Registry modifications should only be carried-out by persons experienced in the use of the registry editor application. It is recommended that a complete backup of the registry and workstation be made prior to making any registry changes.

7a. Launch the Registry Editor (Start, Run, Regedt32). Navigate to 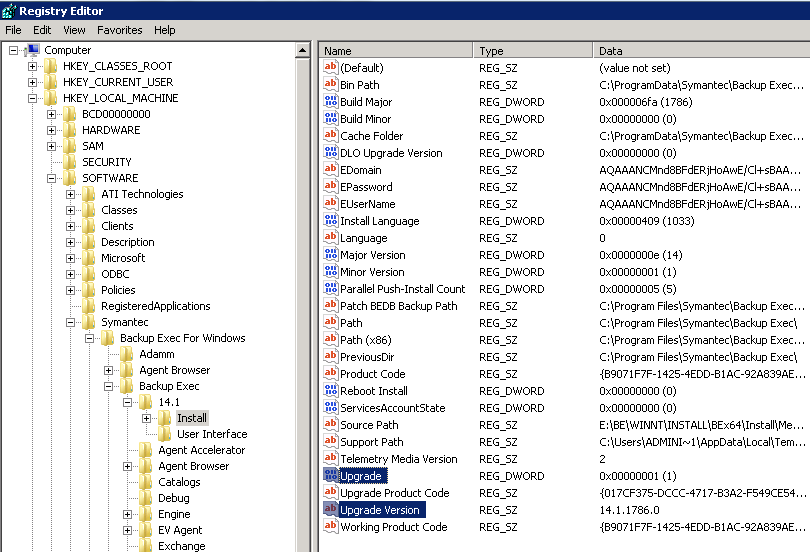 7b. Modify the value of "Upgrade" to 1.
(Create as a Dword if it is not present)

Please refer the following Table while setting the value for Upgrade version Key.
X indicates BE versions that can be upgraded from

9. Start BE services and open the BE console.

Note 1 :  If the services fail to start, you may need to do additional steps of:-

Note 2 : Job Logs (for jobs run prior to the migration) are not maintained inside the Backup Exec Database. If older jobs logs need to be accessible after the migration, then they have to be copied separately, however if Backup Exec is installed in a different path on the new server then you will not be able to open the copied job logs from within the Backup Exec Console itself (and will have to directly open the XML files to review them). Job Histories (which are kept inside the database) should still be accessible.

Note 3 : Due to how volumes are given new identifiers on new servers and how plug-n-play on the operating system will detect storage devices such as tape libraries, any storage devices used as targets for the backups will be seen as new devices after the migration. This does mean you may have to adjust the storage configuration within Backup Exec and also reconfigure the job definitions so that the jobs use the newly configured devices.

Get error -535560174 while migrating the Backup Exec Database (BEDB) from one server to another
Running BEMIG using "Upgrade version = 12.5.2213.0" in the registry, fails with "OS ERROR: 0x80040e37 (-2147217865)"
How to Copy the Backup Exec Database (BEDB) from an existing Backup Exec Server to a new Media Server with the same or different server name.
How to reinstall Backup Exec on the same server while saving settings, jobs definitions and current catalog information
Unable to install any License Keys or add any options through the installation wizard as the "Additional Options" menu is grayed out in Backup Exec for Windows Servers

You are using Microsoft Internet Explorer!

Microsoft no longer supports this browser. As a result, some of the functionality on this website may not work for you. For an optimal experience on our website, please consider changing to Microsoft Edge, Firefox, Chrome or Safari.

Please note that this document is a translation from English, and may have been machine-translated. It is possible that updates have been made to the original version after this document was translated and published. Veritas does not guarantee the accuracy regarding the completeness of the translation. You may also refer to the English Version of this knowledge base article for up-to-date information.

Please note that this document is a translation from English, and may have been machine-translated. It is possible that updates have been made to the original version after this document was translated and published. Veritas does not guarantee the accuracy regarding the completeness of the translation. You may also refer to the English Version of this knowledge base article for up-to-date information.